Citroën has unveiled the fully electric ë-Dispatch van; the first of its electric van line-up and delivering a range of up to 205 miles without losing load capacity. 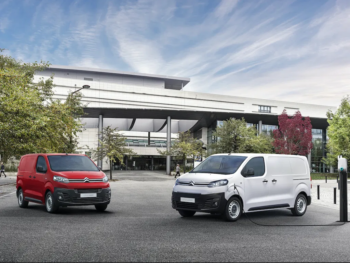 The ë-Dispatch range starts at 143 miles on the WLTP cycle with the 50kWh battery, rising to 205 miles with the 75kWh battery

Revealed just weeks after sister model, the Vauxhall Vivaro-e, the ë-Dispatch is scheduled to open for orders at the start of July and arrive in UK showrooms during the second half of 2020. It will be joined around the same time by an electric version of the Citroën Relay and later, in 2021, by an electric Berlingo van as part of PSA’s electrification offensive.

The ë-Dispatch is aimed at both urban and rural fleet and business users, thanks to its high range and reduced operating costs. As with the Vivaro-e, it comes with a choice of two batteries; a 50kWh pack giving a WLTP-rated range of 143 miles and a 75kWh unit rated for 205 miles.

It’s built on the Groupe PSA EMP2 modular platform, meaning the battery is mounted in the chassis, preserving the load capacity seen in diesel models. This ranges from 4.6m3 to 6.6m3, when equipped with the Moduwork dual passenger bench with fold-up outer seat.

Three lengths are on offer, including the XS model at 4.60m, the M and the XL – which is only offered with the 75kWh battery. It also measures just 1.9m high, aiding use in restricted height car parks and other urban situations. Payload is up to 1,275kg while towing capability is up to one tonne on all versions and the width between wheel-arches is 1.25m; sufficient to load Europallets.

The 136hp electric motor has a top speed of 80mph in all three drive modes – Eco, Normal, Power.

Three charging modes are available: home charging can be carried out via a standard domestic socket and an optional cable. The ë-Dispatch can also be charged using a 7.4kW wallbox – available through Citroën’s partnership with Pod Point – and a standard 32A cable, giving an 80% charge in 7.5 hours for the lower-powered battery and 11 hours 20 minutes for the 75kWh pack. An 11kW wallbox and optional on-board charger gives an 80% charge in four hours 45 minutes and seven hours respectively. For super-fast charging, up to 100kW, at a mode 4 public charging point, charging time reduces to 30 minutes and 45 minutes for the two batteries.

Drivers can use the MyCitroën app to manage the battery charging function, including viewing status and operating range, and controlling the remote cabin pre-conditioning. The ë-Dispatch’s 7-inch touchscreen, available from mid trim upwards, has been updated with an ‘Energy’ menu to show specific electric powertrain features: energy flow, consumption statistics, delayed charging.

Citroën is also offering an eight-year/100,000-mile warranty for the powertrain and battery.

Prices will be announced when order books open on 1 July.