Citroën is introducing a two-seat electric city car that will aim to resolve the challenges of urban travel and environmental concerns. 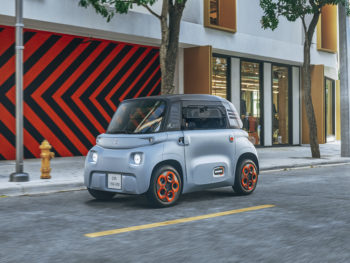 Launching from the spring onwards in selected markets in mainland Europe, the Ami is based on the AMI ONE Concept that launched at the 2019 Geneva Motor Show and is not just intended to rival city cars but also to provide an alternative to scooters, bicycles, mopeds, and even public transport. It’s small enough (just 2.41m long) and light enough to be driven without a licence in some markets – enabling 14-year-olds to drive it in France – while its diminutive size makes it easy to park and its 7.2m turning circle enables it for city use.

It will be made available on Groupe PSA’s Free2Move car-sharing scheme in Paris for hire by the minute or hour and will also be offered for longer-term rental from €19.99 per month (around £17) or for outright purchase from €6,000 (some £5,000).

Vehicles will be sold online as well as through Citroën dealerships with drivers able to take deliveries at their home, via exclusive partners, or at Citroën dealerships. Maintenance will be carried out by a specific network of independent, approved repairers, Euro Repair Car Services garages and dedicated Citroën dealers.

The Ami is capable of speeds of up to 28mph (45km/h) and has a range of up to 43 miles (70km). The 5.5kWh lithium-ion battery, housed flat under the floor, can be recharged via the on-board electric cable, with a 220-volt socket giving a full charge in around three hours.

There’s no boot space as such but Citroën says cabin-sized luggage can be stored in the footwell. The driver’s door is rear-hinged to aid on-board accessibility with a traditionally front-hinged door on the passenger side. Side windows are fixed in place and part open to aid space.

Ami orders open on 30 March in France, and a few months later in Spain, Italy, Belgium, Portugal and then Germany. The first deliveries to customers are scheduled for June in France. Car-sharing will start in the spring in Paris.