Contactless electric car rental service, UFODRIVE, says increased demand for its electric cars isn’t just down to public transport avoidance, but also as a result of cost savings to be had by businesses looking to travel to meetings safely and conveniently. 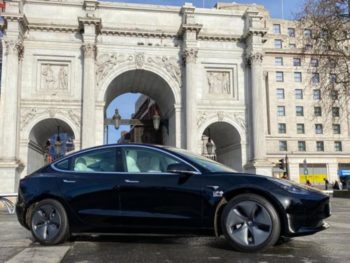 The company, which runs a fleet of Tesla electric cars, expanded into the UK this year following successful rollout across Europe, said that with public transport currently being avoided due to coronavirus fears, which is putting people back behind the wheel of cars, rental demand has been steady – even selling out over the late-May bank holiday.

UFODRIVE CEO, Aidan McClean, said, “With measures starting to relax – even a little, as has been the case in the last couple of weeks – demand for UFODRIVE cars has significantly increased and, for the recent late-May bank holiday, we were actually completely sold out over the extended weekend and demand has remained strong since then.”

The service could also represent cost savings for businesses looking to travel safely and conveniently, with rental costs potentially lower than the equivalent train journey, as well as being safer and more convenient.

UFORDIVE’s UK country manager, Jonathan Shine, commented, “To rent a Tesla Model 3 which would allow two people to travel from London, socially-distanced, to attend an urgent meeting, in Warwick, Southampton, Canterbury or Ipswich actually could cost less than the equivalent train fare on the day.

“It is also going to be more convenient, safer from a COVID-19 perspective, and probably a faster, less stressful experience. Also, it gives people the chance to sample driving and living with an electric vehicle.”

UFODRIVE is in the process of growing its fleet of cars in the UK, which are available from Q-Park’s Central London locations such as Park Lane and Oxford Street. All of the cars are deep cleaned using the Dropless water-free service between rentals.

UFODRIVE says it employs a rigorous cleaning protocol between each and every rental using a Dropless service. The number of locations around London will expand further during 2020 (and ultimately to other cities).

Bookings can be made at UFODRIVE.com, alternatively the free app is available from the iTunes App Store and the Google Play Store.