By Alex Grant / 5 years ago / Features / 1 Comment
Technology which could enable electric vehicles to charge is about to be trialled in the UK, and the benefits go beyond curing range anxiety, as Alex Grant explains. 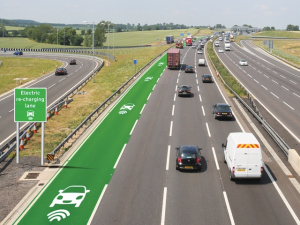 Trials of a wireless charging lane are set to begin in the near future.

World-first trials of a wireless charging system which can top up electric vehicle batteries as they drive are about to begin in the UK. Led by Highways England, it’s hoped that this could eventually be rolled out on the Strategic Road Network, broadening the use of electric drive systems in cars, vans and HGVs.

How does it work?

Wireless charging is already a household technology, most commonly used in electric toothbrushes where exposure to water would make a physical connection dangerous. But it’s also being adopted by the latest smartphones, and several vehicle manufacturers have indicated that they will use it in future vehicles.

It relies on two main components. A charging pad, usually underground, takes an electrical current and passes it through a coil, which generates a magnetic field. Positioned above it, a second pad on the car is able to receive this magnetic field and convert it back to electricity, which is then supplied to the battery.

Highways England is looking to install this on stretches of the UK’s Strategic Road Network. The plan is for 50-metre sections (a two-second gap at 55mph) of the inside lane to be equipped with hardware capable of supplying enough power to keep a vehicle driving at motorway speeds, with enough excess to top up the battery too.

In its feasibility study, the TRL found that it would be possible to supply a 40kW charge to a car or van using a wireless charging system – almost as much as a rapid charger. It would enable EVs to travel longer distances, and PHEVs to cover more distance without using fuel, without requiring significantly larger, more expensive batteries. In both cases, it makes a better business case for the additional cost of electromobility.

Wireless charging suits all vehicle classes and TRL said it could reduce CO2 emissions by 45% over a 20-year period of rising ULEV uptake, while NOx and Particulate Matter (PM) emissions would decline by 35% and 40% respectively, despite only being fitted to a single lane.

How much would it cost?

The benefits are largely on a whole-life basis as initial rollout costs are high, calculated to be between £350,000 and £425,000 per kilometre, including resurfacing the road and connecting the system to the grid. Whole-life cost savings for central government are achieved through improved air quality and reductions in CO2 emissions.

Installation costs can also be partially offset by fitting traffic monitoring loops for Smart Motorways at the same time, said to save £4,900 per kilometre, and wireless charging coils have other uses. The required vehicle-to-infrastructure communication could enable live traffic monitoring, and the coils could be used to guide autonomous vehicles too.

The 18-month off-road trial will examine the business case, energy transfer efficiency, implications on the grid and human health, as well as how the road surface performs after the coils have been installed. On-road testing on short sections of the SRN will follow.