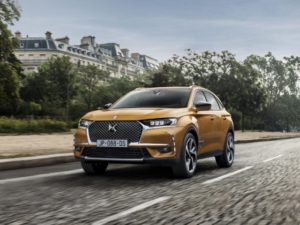 The DS 7 Crossback will launch with a choice of petrol and diesel engines next year, and is available to order priced from £28,000 in the UK. At 4.6 metres long, it falls between premium crossovers such as the Audi Q3 and BMW X1, and larger SUVs such as the Q5, X3 and Mercedes-Benz GLE.

Fully charged, this will produce 297bhp and offer four-wheel drive, with an electric range of 35 miles under the new WLTP fuel economy test cycle. Pricing will start at £50,000, though that’s without any financial incentives included.

The DS 7 Crossback is the first of seven plug-in hybrids due before the end of 2021, which will be available alongside four fully electric vehicles set to arrive within the same timeframe. It’s unclear as yet whether it will launch before plug-in hybrid versions of the Vauxhall Grandland X, which was confirmed at the Frankfurt Motor Show in September.