BMW has presented its latest electric vehicle, the BMW Concept iX3, as well as laying out future electric plans. 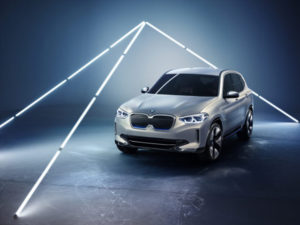 Chief amongst the Concept iX3’s specs include a WLTP range of 249 miles from a 70kWh battery and a 266bhp electric motor powering the Sports Activity Vehicle (SAV). Keeping it on the road, the vehicle is capable of accepting 150kW charge from compatible rapid charge stations – offering 30-minute recharge times.

The future series-production version of the iX3 will benefit from the technological basis underpinning the powertrain of the BMW iNext, due to be presented in 2021, the company confirmed.

The new concept follows BMW Group’s confirmation of a “BMW X3 EV” some nine months ago and was revealed at Auto China 2018, Beijing.

The styling cues hint toward electrification, the company says, with plenty of blue accents. The signature looks of BMW i cars will also mark out future models from the brand.

Featuring the fifth generation of BMW eDrive technology, in which the electric motor, transmission and power electronics have all been grouped together in a more compact unit. In addition, BMW says this system is equipped with more powerful batteries that, together with the electric drive components deliver “considerable advances” in performance, operating range, weight, packaging space and flexibility.

Future vehicle architectures will be able to accommodate front-, rear- and all-wheel drive variants can be made available for models from all the company’s brands, meaning pure combustion engine, plug-in hybrid drive system or battery-electric solutions can be integrated into any model, as desired. The current-generation BMW X3, upon which the iX3 is based, is the first to demonstrate this flexibility.[/vc_column_text]