Battery-electric MINI due in 2019

MINI’s first electric vehicle will be based on its three-door hatchback, and launch in 2019, the company has confirmed. 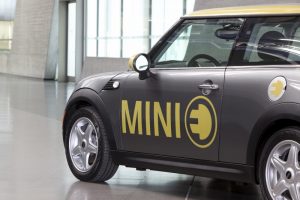 The production car is due to launch ten years after trials of the MINI E (pictured) began.

The production car will arrive ten years after the MINI E, a prototype battery-electric version of the hatch used to test BMW Group technology with end-users. It takes MINI’s plug-in offer to two vehicles, alongside the Countryman plug-in hybrid.

Although the drivetrain will be built at BMW’s EV-specialised factories in Bavaria, they will be integrated into the production line at Plant Oxford in the UK, alongside petrol and diesel-powered versions of the hatchback.

MINI has not confirmed whether the same drivetrain will be fitted to the five-door hatchback, which accounts for 45% of sales. Packaging issues with the battery had made an electric version of the larger Clubman unlikely, despite it sharing a platform with the Countryman.

However, BMW Group has already confirmed that all of its brands and models could be equipped with either fully electric or plug-in hybrid drivetrains– a BMW X3 EV is due by the end of the decade.  As with the MINI, production will take place on the same lines as other versions. By 2025, the Group expects 15-25% of its global sales to be plug-ins, though it said that will depend on incentives and demand.

Oliver Zipse, BMW AG Management Board member for Production said: “Our adaptable production system is innovative and able to react rapidly to changing customer demand. If required, we can increase production of electric drivetrain motor components quickly and efficiently, in line with market developments.”