Vauxhall has announced details of the new Vauxhall Movano and electric Movano-e, which are due to go on sale in late summer this year. 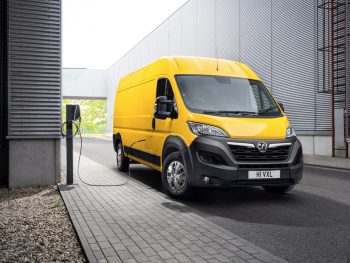 Included in the third-generation Movano range will be panel vans in four lengths (L1, L2, L3 and L4) with three roof height options (H1, H2 and H3), offering load volumes between 8.0m3 and 17.0m3. The range will also include a seven-seat crew van, chassis cab and floor cab.

Diesel power will come from the Stellantis 2.2-litre four-cylinder Euro 6d-compliant engine, offering power outputs in the 120hp to 165hp range. Like the other SEVEL models, Vauxhall will offer a six-speed manual gearbox and front-wheel drive for the Movano range.

The battery electric Movano-e will go on sale at the same time, powered by a 122hp electric motor. Customers will be able to choose between a 37kWh battery offering a claimed WLTP range of 72 miles on a full charge and a 70kWh battery, offering a claimed 139-mile WLTP range. Batteries are mounted under the load floor. Regenerative charging when braking or slowing down helps to optimise available range.

Both VauxhallConnect and the MyVauxhall app open up a range of services for new Movano and Movano-e customers. VauxhallConnect gives drivers access to features such as current charge status, while the MyVauxhall app opens up information including nearby charging stations. LIVE Navigation provides online traffic information in real time for all new Movano models.

Not surprisingly, the new Movano will be based on the Stellantis SEVEL vans, which includes the Peugeot Boxer, Citroën Relay and Fiat Ducato. The outgoing Movano was based on the Renault Master; Renault and Vauxhall/Opel had co-operated on the production of large vans since the 1990s.

In February 2019, the then-joint venture between the PSA Group and FCA announced that the SEVEL partnership would be extended to 2023 and also include Vauxhall and Opel. What happens after that is not yet clear. Since 2019, Stellantis has been formed by the PSA Group and FCA Group merger, fundamentally changing the SEVEL joint venture. The current large SEVEL model was originally launched in 2006, so the launch of a new model cannot be far away.