The number of electric vehicle (EV) charge points at supermarkets has doubled in the last two years, although the proportion of supermarkets offering charging is still low. 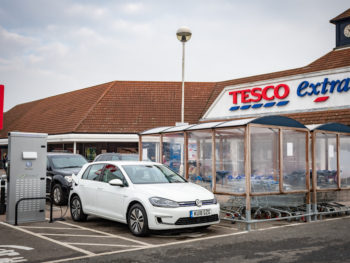 Research by Zap-Map and the RAC has found some 542 EV charger units were installed by supermarkets from the end of October 2017 to the end of 2019, taking the total on their sites to 1,115 – a growth of 95%, which is in line with the overall growth of public charge points

It means 6.5% of all the UK’s public charge points are located at supermarkets, spread across some 608 supermarket sites, with on average two charging units per site.

This equates to 5% of all supermarkets offering charging, which is low but attributed in part to a considerable proportion of smaller supermarket sites not having car parks.

RAC spokesman Simon Williams said: “We have always said that it makes sense for people to be able to charge at supermarkets because anyone doing a full shop will inevitably spend 45 minutes in store. The UK’s big four supermarkets currently dominate fuel retailing so it will be very interesting to see if a similar battle will develop in EV charging.”

When it comes to rapid charging, currently only 15% of supermarket charge points are equipped for this. Morrisons leads the way here with 84 rapid chargers, making for 59% of its total number of chargers. Lidl is second with 63% of its 76 units (48) equipped with rapid charging. Co-op is in third with 18% of 88 chargers (16) capable of delivering its EV-owning customers with a rapid charge. Asda and Tesco, which dominate EV charging generally at supermarkets, are lagging behind in the rapid stakes, with just one and two chargers respectively.

But this could be about to change.

RAC’s Simon Williams continued: “The introduction of more rapid chargers at supermarkets may even stimulate take-up now as it would make EVs viable for those who cannot charge at home because of where they live.”