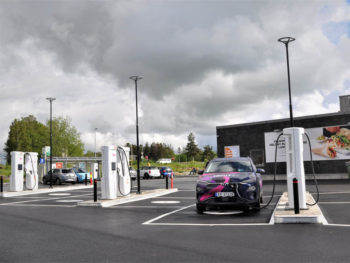 In the last year alone, electric vehicle (EV) charge point locations has increased 57% and can now be found from the Shetland Islands to the Cornish Riviera, from Giant’s Causeway to the White Cliffs of Dover.

Just six years ago there were 3,500 EVs on UK roads, whereas today that figure is greater than 210,000. Forecasters have predicted that by the end of 2022, at least 1 million EVs will be in use in the UK, as backed up by the UK Government’s 2040 policy that says all new cars and vans should be electric.

However, a contradictory article by The Telegraph citing the charity Electrical Safety First claims that 75% of the 1,500 EV owners it surveyed have used an extension lead to charge their vehicle and consequently that there is a direct correlation between an alleged lack of charge points and unsafe charging.

Ben Lane, co-founder and CTO at Zap-Map commented: “The public and private sectors are now investing heavily in the UK’s EV charging infrastructure to ensure that there are sufficient charging points to support the growing electric fleet. This month’s milestone reveals the rapid pace of change already underway as the age of the combustion engine gives way to an all-electric era with vehicles offering both zero-emissions and a better driving experience.”

The news comes as several key new mass-produced electric cars enter the market including the Tesla Model 3 and forthcoming Volkswagen ID.3, which aim to appeal to mainstream buyers rather than catering for more wealthy and therefore smaller numbers of purchasers.

In addition, charge point speed is increasing with the introduction of new rates that are seven times faster than today’s 50kW rapid charger, offering speeds of 350kW for example at Ionity ultra-rapid charge points, although there are no cars as yet on the market that can take advantage of the technology.

Commenting on the data, Daniel Brown, EV Lead at the REA said: “On top of a growing number of on-street and destination charge points across the country, several new companies developing rapid charge points and charging ‘hubs’ have recently been founded or entered the UK market which will give further confidence to both consumers and fleets who wish to go electric.

“National and city-level strategic planning is currently underway and by the end of the year we will see the outputs of both Transport for London and the Government’s electric vehicle taskforces.

“The consumer experience of using public infrastructure is also improving, with four British charge point operators now connecting, so customers can use one RFID card to seamlessly roam across their networks.”