Chinese electric car manufacturer, Byton, has previewed the first of its line-up of luxury cars; a long-range, fully-electric SUV due to launch in Europe during 2020. 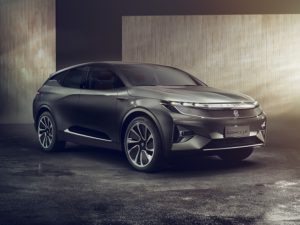 Headquartered in Nanjing, but with R&D operations in Germany and the United States, Byton’s Concept SUV will launch in China next year, shortly before sales begin in Europe and North America. It uses an in-house platform, designed specifically for electric vehicles, which will also underpin a 2021 electric saloon and 2022 MPV.

The production version will be a similar size to cars such as the Audi Q7 and BMW X5, though slightly smaller than the Tesla Model X. It’ll face a growing electric SUV segment, including the Jaguar I-Pace, Audi E-tron and the first member of the Mercedes-Benz EQ line-up, as well as the Tesla Model Y. Pricing for North America is said to start from $45,000 (£33,200) – Byton has yet to hint at how this will compare to Europe.

There will be two versions offered at launch; a 268bhp rear-wheel drive model, featuring a 71kWh battery and range of around 250 miles, and a 469bhp four-wheel drive variant which ups the battery capacity to 95kWh and the range to 323 miles. With 80% of that range restored in 30 minutes, Byton appears to be compatible with 150kW charging points. Production will take place in Nanjing.

Drivetrain technology aside, the concept features a 5G high-speed data connection, enabling cloud-based infotainment on a large centre display, it also gets facial recognition and gesture control, monitors the driver’s health and learns their habits and routines. It’s unclear as yet how much of this will reach production, but Byton said its aim is for the SUV to be the first car in the household.