By Jonathan Musk / 7 months ago / Tech, UK News / No Comments

A £4.1m deal has been announced to fund Trojan Energy’s on-street charging product, which the company says will further electric vehicle adoption for everyone. 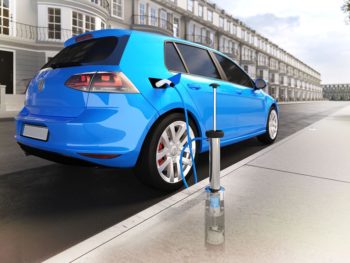 Aberdeen-based green tech start-up, Trojan Energy, has secured a £4.1 million round of seed funding to support the roll-out of its on-street flat and flush electric vehicle (EV) charging points.

The system is designed to cater for people with on-street parking only, but who wish to buy or use a plug-in vehicle. Trojan Energy estimates that 10 million people park on the street in the UK and 100 million in Europe.

The money will go towards testing and certification of the product, with the aim of installing the first 200 units in Brent and Camden Councils by early 2021.

The company also plans to follow the roll-out of its on-street product with a similar driveway product for homeowners, eliminating the need for posts or wall boxes to charge at home.

Kerry Sharp, director, Scottish Investment Bank, said: “It’s been suggested that over half of European car owners will be driving electric vehicles by the end of the decade, so developing an innovative, non-invasive and cost-effective solution to the problem posed by on-street charging is essential. By drawing on years of engineering and commercial experience, we believe the Trojan Energy team can achieve that.”