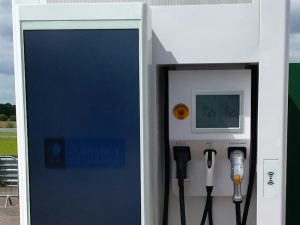 The Rapid chargers from Evolt include six Raption 50 models, which feature a 47-inch LCD screen to offer the council a further revenue generating opportunity

Following its appointment as a Go Ultra Low City, Dundee is creating three new charging ‘hubs’ that will become dedicated areas for the charging of electric vehicles. Each hub will be equipped with Evolt technology, including a combination of Rapid and Fast charging units that can charge two EVs simultaneously to 80% battery life within 30 minutes and an hour respectively.

Each hub will have solar panels installed to feed Evolt’s energy storage solution, which makes use of second life EV and hybrid battery packs.

A further four Rapid chargers and seven 14 Fast chargers will be installed at additional locations outside of the city centre. All of Evolt’s units will be connected to the national ChargePace Scotland network.

Earlier this year, Dundee become one of the eight Go Ultra Low Cities to share £40m of Government funding. Evolt was successful with its bid following a competitive tender exercise, and is working with British Gas as its installation partner.

Fraser Crichton, transport manager for Dundee City Council, said: “We have worked with Evolt for the last five years on charging infrastructure within Dundee and are delighted to continue our relationship to develop some exciting and innovative charging hubs across the city and surrounding area.”