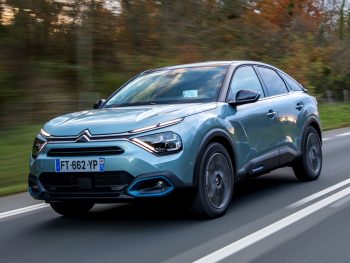 Is it an SUV, or is it a small family hatch? Either way, the new Citroën C4 is nothing like its forgettable predecessor and is all the better for that.

At first, the styling of the new C4, looks more evolution than revolution. There’s obvious styling cues borrowed from Citroën’s most recent model (the C5 Aircross crossover) plus the model it’s designed to replace (the quirky C4 Cactus) in the final look of this car.

The current Citroën family nose, with its familiar tall, sculpted bonnet and double-stage headlights remain, although the V-shaped signature is new and was most recently previewed on the carmaker’s birthday present to itself, the 19_19 Concept car.

Move to the side of the C4 and the taller stance is most obvious, but the curvier roof line is new, as is the more rugged-looking lower plastic cladding. There’s also a distinctive cut out in the panel work where the wing meets the front door. It’s most unusual from the back, where there’s another interpretation of the new V-Shaped light signature and a curvy rear spoiler. Like the old C4, its look can be customised with exterior colour packs.

The ë-C4 looks almost exactly the same as the standard hatch, the only differences being the lack of exhaust pipe, ë-C4 badging and blue highlights.

Inside, again the C4 is more evolution, although the instruments are taken care of by way of a 5.5-inch TFT instrument cluster, with the 10-inch infotainment system in the centre at the top of the dashboard. Interestingly, this C4 Citroën has made a move back to physical controls for the ventilation, which are far easier to operate.

Interior space is generally impressive and the driving position comfortable, supported by the Advance Comfort seats fitted as standard to the C4. However, disappointingly, rear headroom is more compromised – the result of that curvy hatchback roofline. Boot space totals a practical 380 litres.

The C4 is available in Sense Sense Plus, Shine and Shine Plus, and all models have Bluetooth, a DAB radio, automatic air conditioning and Active Safety Brake. Other safety equipment included as standard is Speed Limit Information, Lane Keeping Assist, Driver Attention Alert with lane departure detection and a Forward Collision Warning.

Citroën’s USP is comfort, and the C4 and ë-C4 are the latest models to benefit from its clever Progressive Hydraulic Cushion dampers and this is their best application yet. Whether it’s EV or ICE-powered, we’d go as far as to say this could be the best riding small family car in its class. It is comfortable with impressive composure; despite both the cars we drove being on 18-inch wheels.

What you gain in comfort and refinement with the C4 range, you lose with dynamism. The ride still feels a little unsettled at low speed. With the soft suspension and the extra 236kg of the battery pack of the ë-C4 leading to some body roll. The brakes can also feel a bit pitchy under heavy load  and the steering lacks feel. However, the steering gets better on the move – especially the ë-C4.

The all-electric ë-C4 is a range highlight. The ë-C4 feels torquey (260Nm) and quick off the mark, with the official sprint to 62mph timed at 9.7 seconds. The motor generates 136hp and the 50kWh battery gives a competitive WLTP range of 217 miles. Another bonus is that the ë-C4 can be charged at up to 100kW, meaning it can go from zero to 80% capacity in just 30 minutes.

We also got to drive the PureTech 130 in range-topping Shine Plus specification. It seems well matched to the slick EAT8, eight-speed automatic transmission, but feels very slow off the mark – as you have to squeeze the throttle hard before you get going.

Nothing like as conventional as rivals such as Ford’s Focus and Vauxhall’s Astra. However, if you value comfort and the extra choice of electric power, then the C4 is definitely worthy of keen consideration.