Circontrol has launched a new master-slave charge point for electric vehicles (EVs) that the Barcelona based company says can reduce operational and maintenance costs. 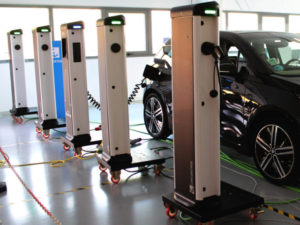 Circontrol presented the new system at EVS30 in Stuttgart.

The advantage to company’s, Circontrol said, is that the system only uses one master unit (that is also a charge point) containing all the necessary hardware to control a grid of slave charge points. Therefore, the slave units can be made cheaper and are simpler to install, so capital expenditure (CAPEX) is lower. In addition, operating costs (OPEX) are reduced as, for example, a single 3G signal can be used on the master unit for the benefit of all the charge points, rather than requiring a 3G signal per charger as per traditional systems.

In common systems, control of several charge points (for example providing consumers IDs, power consumption monitoring, service support, configuration and more) would require costly smart chargers with each being individually connected to a back end control – typically operated by a third party.

Circontrol presented the new system at EVS30 in Stuttgart.