Ford is to begin developing and manufacturing electric and plug-in hybrid vehicles in China, for local customers, by the end of the decade. 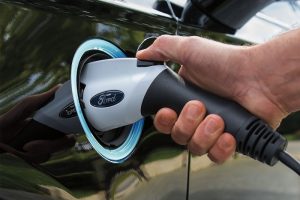 Citing the Society of Automotive Engineers of China, Ford said it expects 15% of all new passenger cars in China to be electrified by 2025; local manufacturing and expansion of its electric vehicle capabilities at the Research and Engineering centre in Nanjing will be aimed at meeting that demand.

The line-up will begin with the Mondeo Energi plug-in hybrid, a Chinese-built version of the Fusion Energi sold in North America, and will include the same 265-mile-range fully electric SUV also due to launch in Europe. By 2025, it aims to offer 70% of its model range in China with electric or hybrid technology.

Mark Fields, president and chief executive officer, Ford Motor Company:. “We are prioritizing our electrification efforts on China to reflect its importance as a global electrified vehicle market and to make lives better, simpler and more cost effective for Chinese consumers.”

Previous: UK rush for hybrids and EVs ahead of April VED changes
Next: Ford hybrid cuts police pursuit fuel bills in half