UK rush for hybrids and EVs ahead of April VED changes

Electrified vehicles accounted for one in 25 registrations during the first three months of the year, figures from the SMMT reveal, with hybrid and electric cars recording the fastest growth. 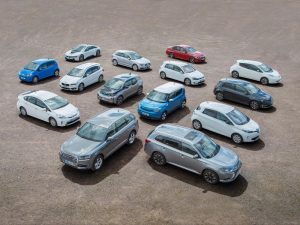 A total of 33,385 electrified vehicles – comprising hybrid, plug-in hybrid, electric and hydrogen fuel cell models – were registered in the first three months of the year; a 29.9% year-on-year uplift on 2016 in a total market up 6.2% in the same period.

Record March sales predate changes to the Vehicle Excise Duty system, which removed the zero-rate fee for vehicles emitting 100g/km or less at the start of April. Under the new system, only fully electric and hydrogen fuel cells qualify for zero VED, though all vehicles with a list price over £40,000 will be subject to a £310 charge for their first five years on the road.

Mike Hawes, SMMT Chief Executive, said, “These record figures are undoubtedly boosted by consumers and businesses reacting to new VED changes, pulling forward purchases into March, especially those ultra-low emission vehicles that will no longer benefit from a zero-rate fee.

“This bumper performance probably means we will see a slowdown in April, exacerbated by the fact there are fewer selling days this year given Easter timing. Looking ahead to the rest of the year, we still expect the market to cool only slightly given broader political uncertainties as there are still attractive deals on offer.”