Ford is adding a second city to its Transit Custom plug-in hybrid trial, with a fleet set to roll out in the Spanish city of Valencia, near the carmaker’s factory. 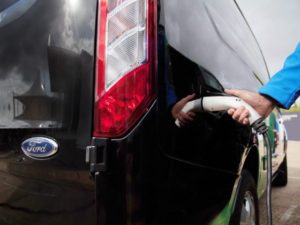 Valencia will be the second city, after London, to test the plug-in Transit.

The trial is a collaboration between Ford Smart Mobility, the regional government of Valencia, and Valencia City leadership, aimed at seeing how the van could contribute to cleaner air and enhanced productivity.

A fleet of 20 are already on trial with fleets in London over a 12-month course, offering a 31-mile battery range and 1.0-litre EcoBoost petrol engine working as a range-extender rather than driving the wheels.

The Transit Custom PHEV will go into volume production next year, as part of Ford’s $11bn investment in electric mobility, one of 40 global models which will also include fully electric vehicles.

Steven Armstrong, president and CEO, Ford of Europe, Middle East & Africa, said: “As no two cities are alike, it is vital that we look at the mobility issue from a variety of perspectives. Our research in Valencia will help us gain a meaningful understanding of the benefits that small and medium fleets running primarily on electric power can bring.”