Ford is to invest $500m (£387m / €448m) in US electric vehicle start-up Rivian in a deal that will also see the two firms work together to develop a new Ford EV. 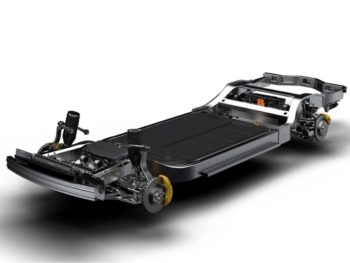 The new vehicle will be built on Rivian’s modular ‘skateboard’ platform, which was revealed last summer and houses the braking, suspension, and cooling systems, with the battery in the middle.

No further details of the EV have been released but it will be developed by Ford in addition to plans announced a year ago for it to significantly increase its planned investments in electric vehicles to $11bn by 2022 and have 40 hybrid and fully electric vehicles in its model line-up by this date. The line-up of full EVs will include a Mustang-inspired crossover due in 2020 and a zero-emissions version of the F-150 pickup.

Rivian has already developed its R1T five-seat pickup and R1S seven-seat SUV, which were revealed at the LA Auto Show in November and will go on sale late 2020 offering around 400 miles of official range.

The equity investment, which is subject to the usual regulatory approval, will also see Ford’s Joe Hinrichs, Ford’s president of automotive, join Rivian’s board of directors. It follows Rivian’s announcement some two months ago of an equity investment round of $700m (£542m / €628m) led by Amazon.

Jim Hackett, Ford president and CEO, said: “As we continue in our transformation of Ford with new forms of intelligent vehicles and propulsion, this partnership with Rivian brings a fresh approach to both. At the same time, we believe Rivian can benefit from Ford’s industrial expertise and resources.”

Previous: Kia and Hyundai EVs to get smartphone performance control tech
Next: UK fleets invited to sign up to vehicle-to-grid trials