Ford is more than doubling its investment in electric vehicles, reviving the Mach nameplate made famous by early Mustangs on a high-performance electric SUV due in 2020. 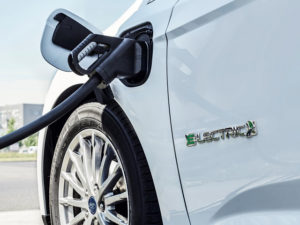 Speaking at the Detroit motor show, executive vice president and president, global markets, said the company would invest £7.98bn ($11bn) in “electrifying the best of Ford” – offering the freedom and road-trip spirit of the brand, including high-performance models, but via battery-powered drivetrains.

The carmaker has been relatively slow so far, with a low-volume electric Focus available in selected markets, plug-in hybrids for North America, and a hybrid Mondeo available in Europe. Next year, it will launch its first plug-in hybrid in Europe – a variant of the Transit Custom – and a longer-range electric version of the next Focus, due to be revealed this year, is also likely.

In 2020, the line-up will grow to include a fully-electric SUV called the Mach 1, built in Dearborn, Michigan and sold globally, which will offer a range of 300 miles when fully charged. Ford’s participation in the Europe-wide Ionity ultra-fast charging network suggests this could offer 350kW charging capability – replenishing most of that range within half an hour.

Hybrid versions of the Mustang and F-150 pickup, as well as electrified police vehicles, will also be available before the end of the decade.

“We’re increasing our investment in electric vehicles and using this technology to give people more of what they love about our most popular and iconic vehicles,” said Farley. “The capability to get the tools to the job site more efficiently and power the job site itself, or keep you running on game day even in a blackout. And we’re also thinking about performance vehicles. It’s the beginning of a new world for our customers; electrifying the best of Ford.”

Previous: Infiniti to launch first EV in 2021
Next: UK already on track for early ULEV adoption