Ford has developed its first plug-in hybrid police car, which it says could enable officers to carry out an entire shift without using any petrol. 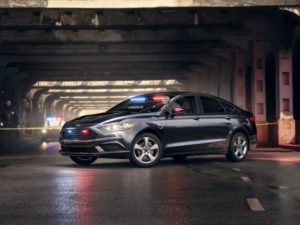 Ford says its newcomer could enable police fleets to cover an entire shift on one charge.

The Special Service Plug-In Hybrid Sedan is based on the Fusion Energi, in turn similar to the Mondeo Hybrid sold in Europe. However, unlike Ford’s Police Responder Hybrid Sedan launched earlier this year, it’s aimed at police, fire chiefs and detectives in non-pursuit roles.

Ford has so far only confirmed details of the electrical system; a 7.6kWh lithium-ion battery which offers a range of 21 miles at up to 85mph and can be fully charged in two and a half hours using a port on the driver’s side wing. While it’s optimistic that drivers would only cover that distance in an entire shift, it should help reduce trips to the fuel station as the cars could be charged at the station.

Once that range is depleted, it switches into hybrid mode. That’s likely to mean it uses the same drivetrain as the Fusion Energi, with a 2.0-litre petrol engine and continuously-variable transmission.

Standard features are tailored to police fleet use, including heavy-duty cloth seats with anti-stab plates, a vinyl-covered rear bench and floor, and reinforcements for mounting lights, radios and other equipment. It also has a surveillance mode, which dims interior lighting and the instrument cluster at night.