Current ultra-low emission vehicle market growth would already be on track to meet milestones on electric vehicle sales ambitions even if the deadline were brought forward. 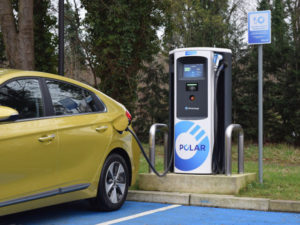 So says Chargemaster, as the Committee on Climate Change (CCC) calls on the Government to revise its new car targets with an earlier deadline to ensure Clean Growth Strategy ambitions are met.

In 2011, the Government announced plans to end conventional car and van sales by 2040 and for almost every car and van on the road to be a zero-emission vehicle by 2050, as reaffirmed in last year’s Air Quality Plan and Clean Growth Strategy.

However, according to the Committee on Climate Change, the 2040 target should be revised to ensure a timely phase-out of conventional diesels and petrols.

In its independent assessment of the Clean Growth Strategy, the CCC outlined key actions that the Government will need to take in the medium-term to ensure its plans come into shape, including ensuring market development for ULEVs keeps 2035 open as a phase-out date for conventional cars and vans, instead of 2040. This would help ensure its 2050 plan for virtually all vehicles on the road in the UK to be zero emission.

The report added: “Given that it takes around 15 years for the stock of cars and vans to turn over, it may be necessary for the sales of petrol and diesel vehicles to end by 2035. A high uptake of ultra-low emission (i.e. plug-in and hydrogen) vehicles by 2030 (i.e. at least 60% of new sales) is required in order to keep open the possibility of 100% of new sales by 2035 and be on track to achieve this by 2040, as the Government has currently committed.”

In response, Chargemaster said its predictions already indicate there will be one million electric cars in the UK by the end of 2022, accounting for around 10% of all new registrations, backed up by more than 30 new electric models coming to market by 2020.

Chief executive David Martell said: “The key driver of the electric car market over the next five years will be consumer choice, with more than 30 new electric cars coming to market by 2020. Indeed, within the next year, we will see models including the new Nissan LEAF, Jaguar I-PACE, Mini Electric, Ford Transit Plug-in Hybrid and Tesla Model 3 in the UK.

“The number of electric cars on UK roads has grown significantly over the last five years, from just over 3,000 in 2012 to more than 130,000 today. New electric car registrations will grow by about one third in 2018, while we expect our deployment of new charging infrastructure to double – more than keeping pace with the car market.”

It’s not the first time that the Government has been urged to bring forward its plans for ULEVs. Last year saw environmental and aid organisations outline how phasing-out petrol and diesel car sales by 2030 could halve UK oil imports by 2035.

The report by Green Alliance, supported by CAFOD, Christian Aid, Greenpeace, RSPB and WWF, outlined how an ambition for all new cars and vans to be zero emission by 2030 would reduce oil imports by 51% in 2035 compared to current projections.

Speaking at the time, Gareth Redmond-King, head of climate and energy at WWF, said: “The UK government’s commitment to end petrol and diesel vehicles sales in 2040 is too little, too late. We can and must go faster. Other countries, such as India and Norway, are way ahead in the scale of their ambitions. To ensure the UK doesn’t miss out on the jobs and investment opportunity in clean, modern vehicles, the UK should up its ambition.”

Last year also saw the DfT clarity its 2040 ‘electric vehicle’ sales ambitions. Although this had been widely misinterpreted as a ban on the sale – and in some cases the use – of vehicles with a combustion engine, it could also have meant mild hybrid vehicles, which use a low-power electric motor to assist a petrol or diesel engine, would still be available after this date.

However, speaking at the Energy Saving Trust’s Fleet Heroes Conference in the autumn, Vicky Edmonds, private secretary to minister of state at the DfT, said: “We are clear that we’re talking about zero-emission capability.” This does include full hybrids such as the Toyota Prius, which have a short electric range, but excludes mild hybrids which figured in a number of manufacturers’ “electrification” plans announced last summer.

Previous: Ford to double EV investment
Next: London to have 700 rapid chargers by 2022