Citroën has released further information and technical details of its all-new ë-C4 electric car, based on the new C4. 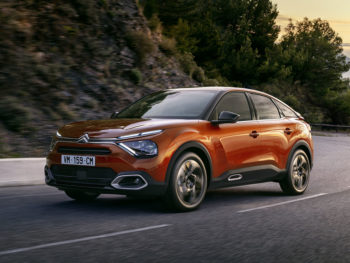 Top of the spec list is a 217-mile range from its 50kWh battery, that can be recharged at up to 100kW on a compatible CCS rapid charge point – meaning a 0-80% charge takes around 30 minutes. Plug in to a 32A wallbox and that time increases to 7.5 hours, although support for three-phase 11kW supplies as found at businesses in particular reduce that time to 5 hours, so well within a working day.

The car is powered by a 136hp electric motor, which is enough to propel the electric car from 0-62 mph in 9.7 seconds, onto a top speed of 93mph when in Sport mode. The new ë-C4 also features a “Brake” setting, which offers regenerative braking and therefore single-pedal driving to an extent as well as some energy recuperation. Several driving modes are available, activated by the mode selector on the centre console: Eco, Normal or Sport.

True to its word, Citroën says the electric car doesn’t suffer any loss of practicality in terms of single charge range, and comes complete with the same size boot as the petrol/diesel powered C4. The electric car does, however, get a new rear bumper and bespoke alloy set to differentiate it from its fossil-fuel powered brethren.

Although there were no market-specific announcements made, the new car is said to come with a host of clever design functions, including a smart pad support – which is a bit like a van’s laptop table – that pops out from the dashboard and can be used even when on the move to hold a tablet device.

Citroën’s executive VP, Vincent Cobée, said that there were no plans as yet to launch an estate model, while the C4’s platform also doesn’t support a plug-in hybrid option and so this too is not on the table. Interestingly, he conceded that only 10% of sales are expected to be for the ë-C4 electric model.

The car’s details follow an earlier reveal two weeks ago, as well as C5 Aircross Hybrid, Ami, ë-SpaceTourer and ë-Dispatch to form part of Citroën’s plans to launch six electrified vehicles this year.

Previous: Aldi and NewMotion partner to bring hundreds of EV charge points to shoppers
Next: Engenie to rebrand as Osprey in Autumn