Green number plates are being introduced on UK roads from today (8 December), helping to boost the profile of electric vehicles and make it easier for councils to introduce eco incentives for EV drivers. 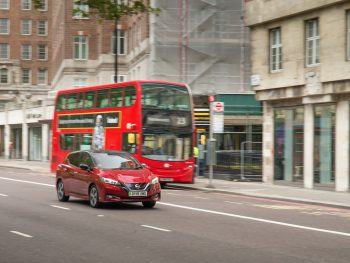 The plates can be retro-fitted to any existing vehicles, including cars, vans, buses, HGVs, taxis and motorcycles, as long as they emit no CO2 emissions at the tailpipe

First suggested two years ago and greenlighted in June this year, the plates can be retro-fitted to any existing vehicles, including cars, vans, buses, HGVs, taxis and motorcycles, as long as they emit no CO2 emissions at the tailpipe, and will also help councils police Clean Air Zones, quickly and clearly showing compliant vehicles.

Introduced some three weeks after the Government confirmed its 2030 ban on new diesel/petrol engine cars/vans, the new plates consist of a green flash on the left-hand side of the plate and can be combined with the Union flag and national identifiers already permitted by the regulations.

Launched following a consultation, they’re expected to help encourage a shift among drivers, as already seen in Canada, China and Norway, which run similar schemes. Transport Minister Grant Shapps has previously said they could “increase awareness of cleaner vehicles on our roads and show people that a greener transport future is within our grasp”.

Poppy Welch, head of Go Ultra Low, greeted the news, saying: “The introduction of green number plates will give consumers another signal that EVs are continuing to grow in popularity and capability which, we hope, will give them the confidence to explore the technology and make the switch. The introduction of incentives provided by local authorities will also help to demonstrate that EVs aren’t just good for the environment; they can provide significant savings and convenience, too.”

And according to Nissan, a third of motorists in the UK would be more likely to buy an electric vehicle because of the new plates.

The Nissan survey, carried out by YouGov, found that with the introduction of green number plates, and the prospect of further incentives linked to EV ownership, 32% of people would be more likely to buy an electric car.

And only 5% of respondents said they would be less inclined to do so.

But the research also revealed that while 81% of people know about environmental benefits of EVs, the majority (53%) don’t know that EVs can save them money, not just from discounted charging and parking but also significantly lower running and maintenance costs than petrol/diesel cars, VED and congestion charge exemption.

Speaking to Fleet World, Andrew Humberstone, managing director of Nissan Motor GB, said there needs to be more work on an industry level to show drivers the benefits of going electric.

“It’s really an interesting one,” said Humberstone. “It was over 50% who were not aware of the financial benefits. So the message is all about an EV being environmentally friendly but the question is that from a financial perspective people don’t know that we’re in an position where actually you can buy a Nissan LEAF EV for less than a traditional C-segment rivals, even before you take into account any financial benefits from running an EV.

“If we look at standard three-year/10,000-mile/£5,000-deposit offer and we look at the rivals – and I’m not even talking about EV rivals, I’m talking internal combustion-engined rivals – the perception of an EV being more expensive is just not a realistic assumption anymore. We have a Nissan LEAF 40kW N-Connecta at £249 a month and that’s less than many ICE rivals in the C-segment.

“And then when you look at it, the running costs are a fraction of the ICE costs and this is another area where the ‘fuel’ is effectively a quarter of the cost of petrol and there’s a saving of c. £1,000 when you’re charging from home. And when you start bringing this into calculations of running costs and you do the sums, it makes a huge difference.

“We see the same with company car drivers too; there’s savings of up to £20,000, depending of the length of the lease. But you’ve also got savings of £3-£5k on the Benefit-in-Kind. There’s significant advantages now in moving to the EV space. Everything to gain at the moment.”

Humberstone also said the new plates will cater for the growing number of people wanting to be seen to be green.

“I think there’s also a degree of street cred that comes with it,” he added, “sending a message out there that says ‘I am green and passionate about this.’ I think you’re also going to see it with vehicles like our e-NV200, where people are using these more and more for the small van segment, including daily deliveries due to the changing business levels we’re seeing as a result of Covid, for example.”

The new green plates are the latest measure from the Government intended to help spur take-up of EVs. The 2030 ban announcement included a pledge of more than £2.8bn in EV investment, including £1.3bn to accelerate the rollout of charge points, £582m in grants for those buying zero or ultra-low emission vehicles and nearly £500m to be spent in the next four years for UK battery manufacture; part of a commitment to provide up to £1bn. The Government has also announced that the Office for Low Emission Vehicles (OLEV), responsible for support for the transition to EVs, has been renamed as the Office for Zero Emission Vehicles (OZEV) as part of its Road to Zero work.

Previous: Fisker ties with Cox and Rivus for 2023 UK launch of Ocean electric SUV
Next: Almost half of drivers expect to go electric in next five years