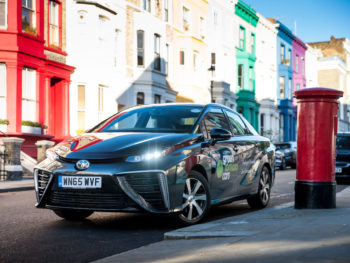 Green Tomato Cars started a trial with two Mirai cars in 2015 and added another 25 some 18 months ago. It’s now deployed a further 25 Mirai on its fleet this month

The private hire firm first trialled two Mirai cars in 2015 and added another 25 some 18 months ago, with the vehicle having now racked up one million zero-emission miles in and around the capital, saving 7.6 tonnes of CO2 each; equivalent to 206 tonnes of CO2 in total.

Building on this success, Green Tomato Cars has deployed a further 25 Mirai to its fleet this month; a move said to give it the largest zero-emission passenger fleet in the UK. The vehicles are run on the company’s Zero Emission Executive service, and drive an average of 120 miles per day, around 8-10 miles per journey.

Jonny Goldstone, founder and CEO of Green Tomato Cars, said: “We’ve been really impressed by the performance of our Mirai fleet and are very proud to have clocked up the magic one million zero-emission miles in these unique cars. Our passengers love them because it means they can travel as responsibly as possible, and so do our drivers. Running costs are comparable with a Prius and re-fuelling takes the same time as a conventional petrol car. We’re rolling out the next 25 Mirai onto our fleet right now and hopefully there will be still more to come.”

Earlier this month, Toyota revealed the second-gen Mirai, which is due for launch in 2020.