Hampshire Constabulary has rolled out the first of a 40 electric vehicles on its fleet, with plans to switch half of its 220 non-pursuit cars to electric drivetrains in the near future. 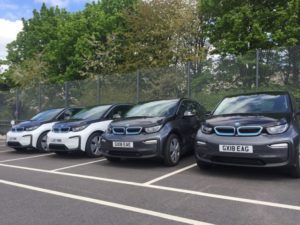 The BMW i3 is said to be well suited to pool car and investigation teams. Image: Hampshire Constabulary

Said to be the first fleet of its kind for a non-metropolitan police force, the newcomers follow a successful deployment of two BMW i3 pool cars with petrol range-extenders. Once complete, the fleet will cut carbon emissions by 64,000kg per year, save £450,000 over the three-year duration of the project, and serve as a model for other forces.

The Constabulary said the i3 REX was ideal for use by investigation teams or as pool cars, offering a 120-mile range for departments which typically cover 100 per day, and with a petrol engine as a backup. No modifications are required, apart from fitting a police radio and tracking system, and the cars can be charged between shifts.

While a “small proportion” of the savings will be used to fund charging points in Southampton, Basingstoke and Portsmouth police stations, their lifespan in excess of ten years mean these will outlast the project. No business case has been found yet to deploy electric pursuit cars, the Constabulary added.

Inspector Andy Tester, who developed the plan, explained: “We are spending public money so it is vitally important that forces find pioneering new ways to transform the way things are done. There is a perception that electric cars are expensive but we have done the sums and wit the help of government grant, the savings for the first three years is £450,000.

“That type of saving, when every force across the country is looking to cut costs, is almost impossible to argue against, especially when you look at the environmental benefits too. Proof of this is how quickly we have seen other forces across the country look at our ideas – imitation is the best form of flattery after all.”

Previous: Nissan to ditch diesel as EVs gather pace
Next: UPS and Arrival to roll out electric delivery fleet