Honda has slotted the final piece of the Honda e jigsaw into place with the announcement of prices at Frankfurt Motor Show. 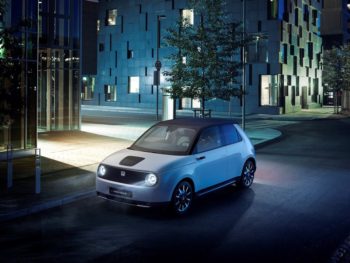 The Honda e is priced from £26,160 OTR for the standard model and £28,660 for the ‘Advance’ grade; both prices include the Plug-in Car Grant

Unveiled today in mass production form at the show, the Honda e will be priced from £26,160 OTR, including the £3,500 from the Government’s Plug-in Car Grant, with order books to open in early 2020.

However, drivers looking to steal a march on the brand’s first mass-production electric vehicle in Europe will be able to place an order from lunchtime today (10 September 2019) for the Honda e Advance. Priced at £28,660 (also including the PiCG), this brings a higher-output motor – 154hp instead of the 136hp variant in the base model – and also adds extra specification, including Centre Mirror System (in addition to Side Camera Mirror System), Honda parking pilot which aids the driver in parking and is a first in the Honda range, and a premium audio offering.

Deliveries of the Honda e Advance will start from early summer 2020 and drivers who’ve already made a reservation in the UK – the Honda e has already accrued 31,000 expressions of interest across Europe, including 9,000 from the UK – will be prioritised for orders.

Phil Webb, head of car at Honda UK, said, “We’re pleased to be able to confirm the pricing for the Honda e. Designed for the urban environment, and originally called the Urban EV, the Honda e has a competitive range of up to 136 miles.

“Honda research has found the average European commute is approximately 30 miles making it more than sufficient. Coupled with the fast charge capability of 80% in 30 minutes and the Honda e is perfect for the urban environment.

“Honda e is the embodiment of the brand’s commitment to electrification and is the next step towards our electric vision for 100% of European sales to be electrified by 2025.”