Honda has published a teaser image of its latest electric vehicle concept ahead of its unveiling at next month’s Tokyo Motor Show. 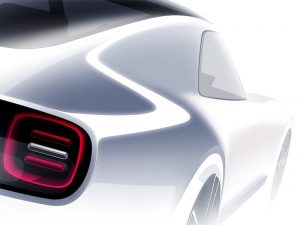 No technical details were given but the carmaker said the Sports EV Concept will combine an electric powertrain and AI technology in a compact bodystyle that combines “a striking silhouette, friendly face and supple body surfaces, all designed to ensure the car blends into any lifestyle”.

The teaser image follows recent hints that future Honda vehicles could phase out diesel power for hybrid and electric drivetrains as the carmaker unveiled its well-received Urban EV Concept electric city car at Frankfurt prior to its launch in Europe in 2019.

Although the carmaker has previously focused on hydrogen and hybrid models, Honda president & CEO Takahiro Hachigo said last June that the brand would strengthen the development of battery electric vehicles in addition to fuel cell vehicles (FCV) after having established an Electric Vehicle Development Division within Honda R&D in October 2016.

Honda’s EV plans also include a China-only EV, due out in 2018 and spearheaded by China’s advancing plans for electric car domination. The carmaker also recently launched the first all-electric version and PHEV versions of its second-generation Clarity hydrogen fuel cell car in the US.For more of the latest industry news, click here.

Previous: Toyota and Mazda outline details of electric vehicle JV
Next: Rapid shift to EVs is possible with help of government, says REA