InstaVolt has started the roll-out of new ChargePoint Express 250 high-powered chargers, capable of up to 125kW charging, on its network. 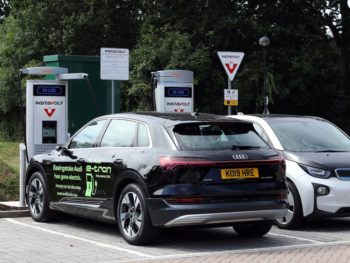 The first charger has already been deployed in Basingstoke, Hampshire, with new stations to follow across the UK throughout the summer.

The higher-power chargers join InstaVolt’s existing network of 50kW rapid charging stations – in some cases being retrofitted on existing sites – and are being installed in line with the arrival of new electric vehicles with larger batteries and higher-speed charging capacities; the ChargePoint Express 250 chargers will be able to add 125 miles of range in just 15 minutes for vehicles able to accept such a charge, including the Mercedes Benz EQC, Jaguar I-Pace and Audi e-tron, which are capable of charging at up to 110kW, 100kW and 150kW respectively.

Furthermore, the chargers – all of which deliver electricity from 100% renewable sources – are able to be used at dual-station locations and can be upgraded to deliver even faster rates of charging as battery technology evolves.

As with all of InstaVolt’s existing charging stations, the new chargers accept payment via contactless credit or debit card, ahead of Government plans to make this mandatory on all networks by spring 2020.

The news of the new technology comes shortly after InstaVolt announced it had become the country’s largest owner-operated network of rapid electric vehicle chargers when it began construction on its 400th rapid charger.

Adrian Keen, chief financial officer at InstaVolt, said: “This technology has the potential to halve charging time for some of our users, which is incredibly exciting. The electric vehicle space is moving at lightning pace and we’re constantly working to ensure we’re prepared for the EVs of the future.”