Ionity – a joint venture between Daimler, Ford, BMW and the Volkswagen Group with Audi and Porsche – has formed a partnership deal with Extra MSA Group that will see the mass rollout of its chargers at motorway services. 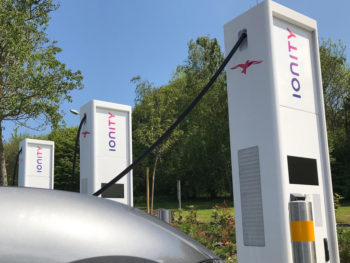 This agreement represents another step in Ionity’s pan-European expansion, which will see up to 2400 chargers (at 400 sites) installed by end of 2020, including a targeted 40 HPC stations in the UK.

The first of the new Ionity/Extra charging stations will be located at Extra’s new M1 J45 Leeds Skelton Lake MSA later this year.

Michael Ellis, roads minister, said “We are working to ensure high quality charging infrastructure is in place to support the clean, green vehicles travelling across the country.”

“Our Road to Zero strategy outlined plans to support the delivery of an electric vehicle infrastructure network that is accessible, reliable, affordable and secure and so we welcome Ionity’s plans to install High Power Charging networks across UK motorways.”

The Extra MSA locations complement the existing Ionity network in the UK and bring Ionity closer to delivering its target of 40 HPC Stations. Other partners in the UK IONITY network include Shell and Motor Fuels Group.

Dr. Marcus Groll, COO Ionity, said “We are excited to be partnering with Extra to further expand our pan-European network. We are making e-mobility a practical alternative to motorists in the UK, greatly enhancing the ownership experience. It is fantastic to have Extra on board, helping us position charging stations at critical locations across the UK Motorway Network.”

Andrew Long, CEO Extra MSA Group, added: “Extra is a long-term investor in the MSA sector and we are pleased to have established a good working relationship with Ionity to deliver additional HPC Stations on the UK Motorway Network.  Ionity can provide the latest Charging technology as required for a new generation of electric vehicles and which facilities will become an increasingly important part of all of Extra’s ‘umbrella branded’ MSAs, inclusive of those within our ‘pipeline’ of proposed new MSA developments.”