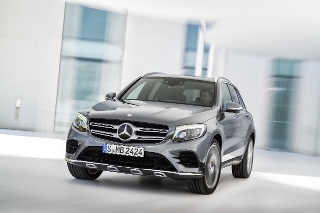 The GLC, which will compete against the Audi Q5, BMW X3 and Lexus NX, will include the brand’s fourth plug-in hybrid, the GLC 350 e 4MATIC, which features a similar drivetrain to the equivalent C-Class. It marks an entry into a segment where the brand has only previously competed in left-hand drive markets, with the outgoing GLK-Class.

The plug-in hybrid combines a 2.0-litre four-cylinder petrol engine producing 207bhp, with a 114bhp electric motor and seven-speed automatic transmission. Provisional figures indicate an electric range of up to 21 miles on a full charge, with the ability to reach 62mph in 5.9 seconds from rest by combining its two power sources, as well as four-wheel drive.

Prices and availability for the GLC 350 e 4MATIC have not been announced as yet, but the model is likely to be the first of several plug-ins in its class.

Audi has said it will launch an electric SUV of this size in 2018, and recent model launches from BMW suggest it’s likely that it will offer something similar. Tesla Motors is also developing a compact executive-size chassis in the Model 3, which could spawn a downsized version of the Model X SUV with an electric drivetrain.