By Jonathan Musk / 8 months ago / UK News / No Comments

Mercedes-Benz has announced it will show for the first time its high-capacity electric “sedan” EQV, alongside other plug-in vehicles and trade-fair firsts at the IAA Frankfurt Motor Show this year. 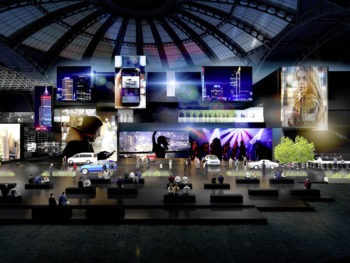 At the IAA 2019 in Frankfurt, Mercedes-Benz will show off its latest electric cars, along with plug-in hybrids and other model debuts

Running from the 12-22 September, the IAA held at Frankfurt will be used by Mercedes-Benz to premier “a vehicle that embodies the flexible, customer-oriented and sustainable vision of the Mercedes-Benz product and technology brand EQ.”

Also on show for the first time will be new Mercedes-Benz plug-in hybrid derivatives and the all-electric high-capacity “sedan” (saloon) EQV. The latter is of interest, as the original EQV concept featured a 100kWh battery and was designed as an electric-powered MPV. Whatever the case, the EQV will follow on from the recently launched 259-mile range EQC SUV, which goes head-to-head with the Jaguar I-Pace, Audi e-tron and to an extent, the Tesla Model X too.

The Mercedes-Benz GLB will also celebrate its trade fair premiere.