Skyline Taxis has deployed four EVs for operation in Milton Keynes with the help of the local council. 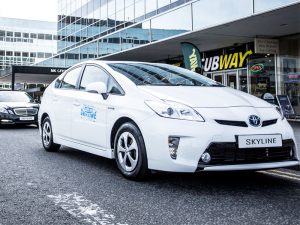 The firm plans to improve the fleet further with Wi-Fi and payment by chip and PIN.

The firm has invested in one Nissan LEAF and three Tesla Model S 75D cars, part-funded by the Government’s Plug-in Car Grant.

The move follows a pilot scheme in 2015, which saw Skyline trial a 24kWh Nissan LEAF for a four-week period – although the vehicle was well-received by customers and drivers, the company took the decision to wait for the release of the 30kWh LEAF, saying that the fewer charges and a longer range would significantly improve the drivers’ experience and earnings.

Skyline Taxis also consulted with the council on licensing policies and worked with Chargemaster on establishing charging point locations.

The firm plans to expand the fleet further in the future as well as offer in-vehicle Wi-Fi and payment by chip and PIN.

Previous: Mercedes-Benz to launch diesel PHEV next year
Next: Shell to offer EV charging in the UK