Box Energi has signed a deal with Tritium – the Australian-based rapid charge device specialist – for the sole supply of new DC rapid chargers for sites across the UK. 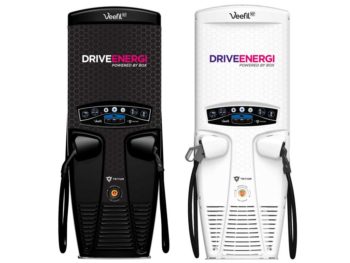 The Drive Energi network will include 2,500 charging locations by 2025

The new network of rapid chargers is to be called Drive Energi, which is slated to include 2,500 charging locations by 2025, with at least 100 sites live by end-January 2020. At present, the UK has in the region of 2,300 rapid chargers, at more than 1,500 locations supplied by various network operators.

Once completed, Drive Energi will be one of the largest single-country DC rapid charge networks in the world. Once complete, the network will consist both public and private charging solutions, with the private chargers specifically located to cater for private fleets across the country.

“We chose to work with Tritium because its technology is proven and its chargers are reliable, robust and trustworthy,” said James Moat, CEO of Drive Energi. “These chargers are not only the fastest and most advanced in their class, but incredibly easy to use and, with the world’s smallest physical footprint, to deploy as well – particularly in our cities and high-density areas where space is increasingly limited.”

Each site will feature up to two Tritium Veefil-RT 50kW DC Rapid Chargers – capable of adding 60 miles of range in 20 minutes of charging – along with a number of lower-power AC chargers. By comparison, a 7kW charger adds about nine miles every 20 minutes. Each Veefil-RT offers charging for CCS and CHAdeMO charging standards.

Tritium will additionally supply 24/7 support for the network, including on-site support when and where required.

“As the nation increasingly looks to electrify transportation, and as the ULEZ (Ultra Low Emission Zone) scheme comes into effect, the need for reliable, smart and easy-to-use charging infrastructure is critical,” said Kevin Pugh, business development manager for UK and Republic of Ireland, Tritium.  “Drive Energi is an exciting addition to the market with a vision to build a new network offering charging confidence with the EV driver’s needs at its core.

“With the average daily commute in the UK in the vicinity of 20 miles, a single 20-minute charge will add about three days of range to an EV. The sheer scope of the proposed Drive Energi network means that people will easily be able to find a charger, no matter where they are and no matter when they need it.”