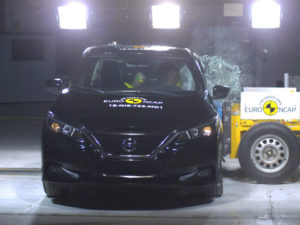 Matthew Avery, director of research at Thatcham Research – a member of Euro NCAP since 2004, commented: “Safety campaigners have raised concerns about noise, or rather the lack of it, in fully electrified vehicles – especially in urban driving environments. This is why standard-fit AEB systems that can detect Vulnerable Road Users should be fundamental to any electric vehicle’s suite of safety technologies – as the Nissan Leaf demonstrates.”

The new Euro NCAP tests mean that carmakers will struggle to get five-star ratings without AEB technology that can protect vulnerable road users.

Other Euro NCAP rating updates for 2018 include testing of pedestrian detection in darkness and obscure lighting conditions and verifying Emergency Lane Keeping systems are working correctly.

Receiving the same five-star rating as the original model – which was the first all-electric car to get five stars – the new Nissan Leaf scored 93% in adult occupant protection, 86% for child occupant, 71% for vulnerable road users, which replaces the previous pedestrian rating, and 71% for safety assist.

Euro NCAP said the Leaf demonstrates that “environmental friendliness need not come at the expense of improved safety”.