Škoda’s new Octavia line-up will include two plug-in hybrids predicted to take up to a third of UK volume – with renewed Benefit-in-Kind incentives next April driving many into fleets, the carmaker said. 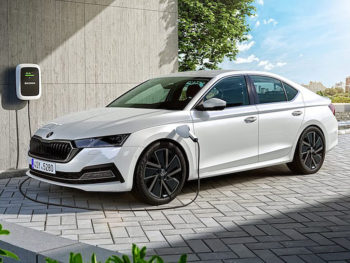 The new Škoda Octavia will include two plug-in hybrid versions

Newly revealed, the fourth-generation Octavia will arrive in the UK in Q2 2020, replacing Škoda’s best-selling fleet product. Businesses account for 70% of the 18,000-unit lifetime-average units sold in the country each year, and volumes are split almost equally between the hatchback and estate. The latter takes two-thirds of sales globally.

From launch, UK customers will get the familiar three-model S, SE and SE-L trims, with sporty vRS versions due to follow in the autumn – around 20% of UK fleet and retail customers opt for these. Engine options comprise three RDE2-compliant diesel and three petrol units, two of which can be equipped with a 48-volt mild hybrid system. This provides electric motor assistance under load and enables it to ‘coast’ with the engine off when it’s not working hard.

Significantly, the Octavia range will also include two petrol plug-in hybrids, producing 204hp or 245hp and available in both bodystyles. The lower-powered version uses a 1.4-litre turbocharged petrol engine and 102hp electric motor, while the 13kWh battery offers a WLTP range of up to 34 miles. CO2 emissions and fuel economy have not been confirmed yet.

As Škoda already offers petrol and diesel versions of the vRS, and Volkswagen will be utilising the 245hp drivetrain in the forthcoming Mk8 Golf GTE, it’s also possible that the new Octavia will be the first vRS model to be offered with a hybrid drivetrain.

Closely following the plug-in hybrid Superb and electric Citigo, Škoda is aiming for a quarter of its global sales to be plug-ins by 2025. Product marketing manager, James Snowden said plug-ins could account for 20-30% of UK Octavia sales, which would make it the company’s best-selling electrified model, but added that it was difficult to predict.

“I guess it depends on how that market evolves. We’ve got a very strong fleet mix on Octavia, and the benefits post-April from a company car driver perspective are going to incentivise uptake as an alternative fuel vehicle. So really it just depends on how companies, and people purchasing the cars, react,” he explained.

In turn, the newcomer is expected to continue to underpin the UK fleet team’s expansion efforts: “Over the last few years we’ve done really well becoming a credible player in that user-chooser and job-need market. We’ve grown our presence in fleet, and grown our share, and we’ve done it largely off the back of Octavia because that product lends itself to that market anyway,” Snowden continued.