New Peugeot 508 to include PHEV version

Peugeot’s has re-invented the 508 as a four-door coupe, confirming that the newcomer will be available with a plug-in hybrid drivetrain next year. 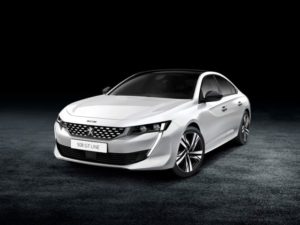 Set to be unveiled at the Geneva Motor Show in March, the second-generation 508 is slightly smaller than the car it replaces, featuring a lower roofline and frameless windows. It’s said to be an effort to improve residuals in a segment where 65% of customers are business users across Europe, and which has seen long-term stagnation as drivers opt into SUVs and premium brands.

The launch range comprises two petrol and four diesel engines, but Peugeot will launch a plug-in hybrid version in autumn 2019. As yet, it hasn’t confirmed which PHEV drivetrain it used – the platform can accommodate two or four-wheel drive versions, and both are under development – but, unlike the old car’s Hybrid4 setup, it will be based on a petrol engine rather than a diesel this time around.

In a technical presentation two years ago, PSA said to expect a range of 36 miles to a fully-charged battery, with the ability to charge at up to 6.6kW – that’s twice as fast as most of today’s PHEVs. Premium brand DS is the first to get the technology, as part of the DS 7 Crossback SUV line-up.

Previous: New Volvo V60 to include two PHEV versions
Next: BMW to team up with Great Wall Motor on battery-electric MINIs