The new Volvo V60 estate will launch with a choice of two petrol plug-in hybrid versions later this year, the carmaker has revealed. 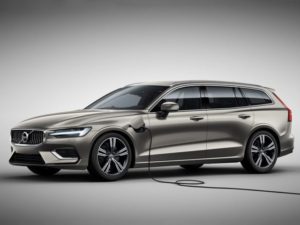 The new Volvo V60 will launch with two PHEV versions.

Unveiled today, the V60 renews Volvo Cars’ presence in the compact executive sector, rivalling products including the Audi A4 Avant, BMW 3 Series Touring and Mercedes-Benz C-Class. At the time of going to press, only the C-Class is available as a PHEV estate.

The launch line-up includes two plug-in hybrid versions, mirroring the outgoing model, but this time based on a petrol engine instead of a diesel. The T6 Twin Engine produces 336bhp, while the T8 Twin Engine puts out 385bhp – both feature an electric rear axle and petrol engine in the front, as opposed to the front-wheel drive T5 Twin Engine setup which is due to go into the XC40 crossover later this year.

Expect the range to comprise the same Momentum, Inscription and R-Design versions offered in other models, as well as a raised-height Cross Country estate-SUV crossover.

The V60 is also likely to be joined by the S60 saloon, which should appear at a future motor show in regions such as Asia or North America, where four-door bodystyles are more popular than in Europe.

Previous: Mazda’s 2019 EV to get rotary range extender
Next: New Peugeot 508 to include PHEV version