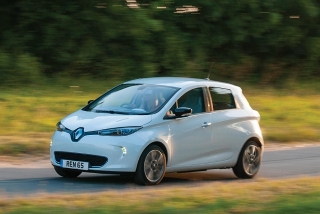 From the 1st April, buyers will be able to claim a 35% discount of the vehicle’s recommended retail price, up to the already existing £5,000 cap. Significantly, this means electric cars priced under £20,000 will be able to take advantage of most or all of the £5,000 discount for the first time.

At the moment, the increased incentive applies to the all except one of the Nissan LEAF trim levels when customers lease the battery, and all versions of the Renault ZOE. Funding remains in place until 2017, or until 50,000 grants have been issued, and the updates do not apply to the Plug-in Van Grant.

OLEV’s announcement also revealed new criteria for applications. From the 1st April these are split into three categories which recognise – for the first time – a vehicle’s ability to cover longer distances on electricity. So Category 1 requires a range of at least 70 miles and CO2 emissions of 50g/km, largely limited to pure electric vehicles but also including the BMW i3 Range Extender.

As yet, it is unclear whether OLEV will eventually offer different levels of grant depending on the categories.

Since the Plug-in Car Grant launched in January 2011, followed by the Plug-i Van Grant in February 2012, more than 25,000 claims have been made, OLEV said, including a record 2014 with four times the applications of 2013. This puts the UK ahead of France and Germany in terms of plug-in vehicle take-up and sales are continuing to rise – SMMT figures showed 1,203 plug-in hybrids and 512 electric vehicles were registered in January.

Transport Minister Baroness Kramer said: "More and more people are deciding a ULEV is the right choice for them. They are great to drive, easily chargeable at home or on the street, and cheap to use with running costs from just 2p a mile. The government’s £500 million investment will help more models become available to suit a wide range of budgets. This thriving industry will support jobs and build a stronger economy.’