Openreach is to trial a fleet of six plug-in hybrid electric vehicle (PHEV) vans, part of work to go fully electric and deployed under a new project with Rivus Fleet Solutions. 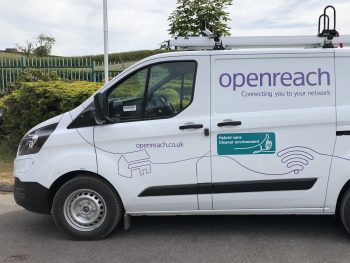 Commenting on the new vehicles, Clive Selley, Openreach CEO, said: “Openreach is leading the charge on the transition to electric vehicles. Our order today is an important first step as we begin to move our fleet, which is the second largest commercial fleet in the UK, to being fully electric.”

As a founding member of The UK Electric Fleets Coalition, Openreach – and other major UK fleets – have recently written to the Government, asking for a target to be set for 100% of new car and van sales to be fully electric by 2030 (with exceptions for the small number of vehicles where this may not be possible); its contribution was filed under the recent consultation on whether the current 2040 date could and should be moved forwards.

Gary Harrison, head of engineering at Rivus, said the trial would bring real-world insights into how Ford’s PHEV tech could bring benefits for fleets.

“The hybrid option from Ford is particularly interesting because we’ve seen the technology work for domestic use and now we’re learning for the first time about how it performs in the tougher world of commercial use,” he explained.

Harrison added: “We had one of the few prototypes of the Transit Custom PHEV and tested it for two weeks before making the decision that it would be a good fit for Openreach. The motor industry is currently going through the biggest change since the introduction of the internal combustion and it’s really exciting to be at the forefront of applying this change to the commercial vehicle sector.”