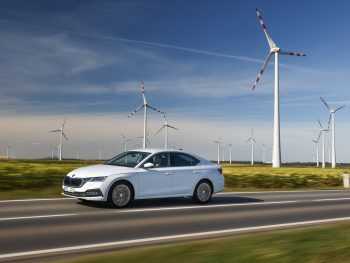 Hot on the heels of the original launch line-up, the hatch and estate will gain the new powertrains, including two plug-in hybrids, both featuring the iV designation used for the brand’s inaugural Superb iV PHEV earlier this year.

Both are powered by a 150hp 1.4 TSI petrol engine and a 116hp electric motor, but are calibrated to offer two different power outputs. The lower-powered version – dubbed purely as the iV and offered in SE trim level or higher – offers a combined 204hp and maximum torque of 350 Nm.

The higher-powered version gets the coveted vRS moniker thanks to its 245hp and maximum torque of 400Nm. In both hatch and estate guise, it can accelerate from 0-100km/h in 7.3 seconds with a top speed of 225km/h (140mph). The vRS iV also gets the usual vRS treatment on the exterior, which features black accents and black 18‑inch alloy wheels as standard, and the interior.

Both will come with a six-speed gearbox, featuring shift-by-wire technology and offer Eco, Normal, Sport and Individual driving modes – as well as a Comfort option if the car is fitted with Dynamic Chassis Control (DCC). The driver can also switch between E-mode and Hybrid mode on the central Driving Mode Select display. The Octavia iV variants also make use of brake energy recovery, either automatically or as set by the driver; the system can also be set up with predictive efficiency assist if required.

The 13kWh lithium-ion battery provides an all-electric range of up to 60km (37 miles) in the WLTP cycle with a top speed of 140km/h (87mph). Fuel economy and pricing are yet to  be announced.

Škoda is also introducing a new pair of mild hybrid engines in Europe, debuting a new ‘e-TEC’ designation that will remain reserved for cars equipped with mild hybrid technology. They will include a 110hp three-cylinder 1.0 TSI petrol and a 150hp 1.5-litre TSI, both with a 48V belt-driven starter motor and a 48V lithium-ion battery, bringing reduced fuel economy. Further details for the UK including pricing are due in the coming days.