BMW has introduced a plug-in hybrid version of the X1, with the same powertrain to arrive later this year in the X2. 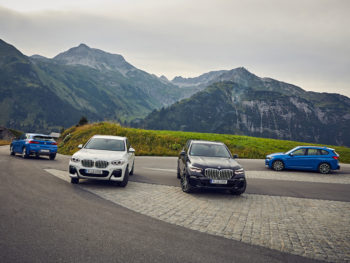 Priced from £38,200 and available to order now in Sport Line, xLine and M Sport trims in the UK, the X1 xDrive25e is a key part of the group’s EV plans – which will see it have 25 electrified models on sale in 2023; two years ahead of the original 2025 timeline.

Offering an electric-only range of between 33 and 35 miles, the xDrive25e variants of the X1 and X2 both use a plug-in hybrid setup comprising a 125hp 1.5-litre three-cylinder petrol married up with a 95hp electric motor, giving a total 220hp and 385Nm of torque. The petrol engine transfers its power to a six-speed Steptronic transmission and drives the front wheels, while the motor delivers power to the rear wheels via a single-speed transmission.

The setup is intended to provide maximum driving stability, ride comfort and dynamic response, including a 0-63mph time of 6.9 seconds for the X1 xDrive25e and 6.8 seconds for the X2 xDrive25e, along with top speeds of 120mph and 121mph respectively.

Average fuel consumption falls between 134.5-148.7mpg with CO2 emissions between 43-48g/km, although final figures are still due for the X2 xDrive25e along with pricing.

The two models use a 10kWh lithium-ion battery. Charging can be carried out via conventional household sockets using the standard-equipment charging cable, giving a full charge in around five hours. Using a BMW i Wallbox, a full charge takes just over three hours.

Drivers can also activate the eDrive functionality to access different driving modes, including the Auto eDrive function and a Max eDrive setting that enables maximum use of the electric drive, restricting top speed to 84mph.

There’s also a Save Battery mode that can reserve battery use for a later time, for example when driving in ‘green zones’.

The battery is located underneath the rear seats, bringing boot capacity of 450 litres for the X1 xDrive25e, rising to a maximum of 1,470, compared to 505 and 1,550 litres for petrol and diesel models.

Both models feature acoustic pedestrian protection activated at speeds of up to 19mph and part of the standard equipment, along with 17-inch alloy wheels, two-zone automatic air conditioning plus sports seats and LED headlights in the UK.

A trailer tow hitch with detachable ball is optionally available for the new X1 xDrive25e, with a maximum trailer load of 750kg.

The new models join existing BMW Group PHEVs, including the 5 Series and 2 Series Active Tourer variants launched last year, while the carmaker’s work on plug-in hybrids is being amplified with the forthcoming arrival of the eDrive Zones function. This will use geo-fencing technology to recognise established ‘green zones’ in cities and switch the vehicle to pure electric driving mode accordingly.

The X1 xDrive25e starts customer deliveries from March while the X2 xDrive25e is available from the summer.