Renault’s Arkana coupé-SUV is to make it to the UK and Europe, bringing SUV practicality with coupé-focused design and an electrified engine line-up. 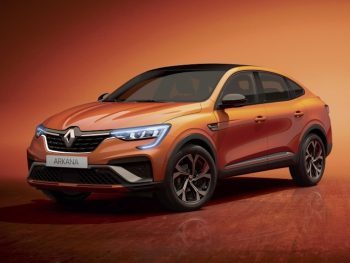 It’s nearly two years since the carmaker revealed the Arkana at the Moscow International Motor Show and although its arrival in the UK and Europe was uncertain at the time, Renault has now confirmed it’s on the way.

Named after the Latin word ‘Arcanum’, which means ‘secret’, the mid-sized compact SUV will join Renault’s SUV line-up alongside the Captur and Kadjar.

It’s built on the Renault-Nissan-Mitsubishi Alliance’s CMF-B modular platform which underpins the Clio and Captur and is sized only slightly longer than the Mégane hatchback but brings boot space of 513 litres with a raised floor and rear seats which can be folded completely flat.

A range of electrified powertrains will be on offer, including Renault’s latest full hybrid E-Tech technology already seen in the Clio and Mégane. This combines a 1.6-litre petrol engine with a lithium-ion battery and two electric motors for a total power output of 140hp. As with Renault’s other E-Tech models, it will also feature a smart multi-mode clutchless gearbox, designed to provide gear-shifting and greater energy efficiency. It also offers three driving modes via the Multi Sense settings to select a specific driving mode: My Sense for daily driving, Eco for lower fuel consumption and Sport to combine the power of the engines.

Mild hybrid technology will also be offered in the range with a 140hp 1.3-litre four-cylinder turbocharged direct-injection TCe petrol engine, paired with an EDC dual-clutch automatic transmission. The mild-hybrid technology uses an added alternator-starter system paired with a 12V lithium-ion battery to enable energy regeneration during deceleration and assist the engine as needed, reducing fuel consumption and CO2 emissions. Figures are yet to be announced.

Trim levels are yet to be announced but the Arkana will follow its Clio and Mégane siblings in offering an RS Line grade. The Arkana will also get the latest connected technologies as well as a suite of Advanced Driver Assistance systems. The interior will feature either a 4.2-, 7- or 10-inch Driver Information Display (dependent on the model) and a 7-inch horizontal or 9.3-inch portrait Easy Link touchscreen infotainment display. Connected services through Easy Link or the MY Renault app include remote vehicle control as well as real-time traffic information. The multimedia system and onboard mapping can also be updated automatically over the air.

Drivers can also use Renault Multi Sense technology to tailor driving mode and change preferences such as lighting.

The Renault Arkana will be available to order from July 2021, with first deliveries in September 2021. Prices will be confirmed closer to launch.