Renault to launch hydrogen LCVs for 2020

Renault is introducing hydrogen range-extender versions of its Kangoo and Master vans in 2020, bringing around three times more range than the current electric versions. 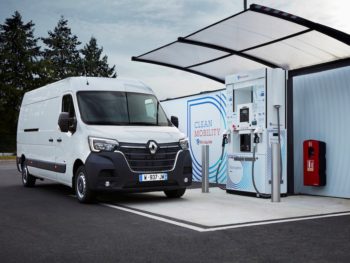 The hydrogen fuel cell will be used as a range extender, enabling up to three times more range than 100% EVs with a refuel time of 5-10 minutes

Being offered alongside the existing Kangoo Z.E. and Master Z.E. fully electric vans, the hydrogen versions will use a range-extender fuel cell providing electric and thermal power of 10kW to increase the vehicles’ ranges.

Developed in partnership with Symbio, a Groupe Michelin subsidiary, the technology is said to enable three times more range than 100% electric vehicles and both models will boast claimed ranges of over 350km (equivalent to 217 miles and subject to certification), compared to 120km (75 miles) for the Master Z.E. and 230km (143 miles) for the Kangoo Z.E., enabling their use for long-distance fleets.

A further advantage of hydrogen is that charging takes just five to 10 minutes.

Expected in the first-half 2020, Renault Master Z.E. Hydrogen will be available in two van and two chassis cab versions. The two hydrogen tanks are located under the car body, ensuring no compromises on the load volume, which ranges from 10.8m3 to 20m3 with an additional weight of 200kg.

Pricing for the Kangoo Z.E. Hydrogen will start at €48,300 (£41,640) ex. VAT (including the battery purchase and excluding local incentives). Renault has not announced pricing for other markets or whether the vans will launch in the UK.