Renault is to address both the cost and desirability of EVs under its future electric strategy, reviving iconic models and using a new e-powertrain and platforms. 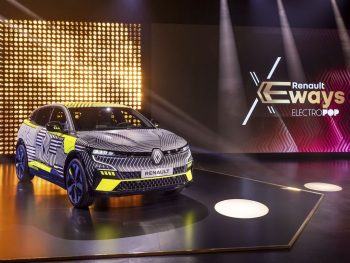 The Renault Group will launch 10 new battery-electric vehicles by 2025, seven of them for the Renault brand and including the reborn 5 and ‘4ever’

The strategy, revealed at its eWays ElectroPop event, plans for the launch of 10 new battery-electric vehicles by 2025, seven of them for the Renault brand.

The reborn Renault 5 revealed at the start of 2021 will be central to this but the group is also to revive the 4 nameplate as the ‘4ever’ – a name chosen to reflect its status as a “timeless classic”. Both will feature retro styling already proving popular for the Honda e and Fiat 500.

These will join the MéganE due in 2022 while the trio of cars teased in January for the group’s Alpine performance brand – dubbed the “dream garage’ – will arrive in 2024.

The plan is to have up to 90% battery electric vehicles in the Renault brand mix in 2030 and to manufacture up to one million electric vehicles, but the new strategy also sets out how the group will be competitive as well as sustainable.

This includes through the use of its CMF-EV and CMF-BEV dedicated EV platforms. The brand-new CMF-BEV platform will be used for B-segment models such as the Renault 5 and will enable the group to make “affordable EVs for everyone” – the platform will reduce EV costs by 33% compared to the current Zoe while offering up to 249 miles (400km, WLTP).

Renault’s plans for producing cost-competitive “made in France” cars also pivot around its newly announced ElectriCity electric car production hub in northern France, which groups together the three plants of Douai, Maubeuge and Ruitz, as well as a strong ecosystem of supplier facilities. It’s sited in the heart of European BEV demand as France, the United Kingdom, Germany, Italy and Spain will represent around two-thirds of the total in 2025.

And from 2024, it will be supplied with cost-competitive batteries by the Envision AESC gigafactory in Douai, which will initially have an annual output of 9GWh and is planned to expand to 24GWh by 2030.

Renault is also working with French start-up Verkor to co-develop a high-performance, locally sourced and sustainable battery by 2022. The group will also switch to a new standardised battery chemistry that will cut costs, while preparing the arrival of all solid-state battery technology within the Alliance in 2030.

Renault will also optimise powertrain costs, including a tie-up with French start-up Whylot to cut hybrid powertrain costs by 5% for B- and C-segment passenger cars, but the group is also working on a new electric powertrain that will enable a 30% in costs and increase EV range by up to 20km (12 miles).

Luca de Meo, CEO of Renault Group, said: “Today is an historic acceleration of Renault Group’s EV strategy, made in Europe. By building our compact, efficient, high-tech electric ecosystem Renault ElectriCity in Northern France together with our e-powertrain MegaFactory in Normandy, we create the conditions of our competitiveness, at home.”

He continued: “Ten new electric models will be conceived and up to one million electric vehicles will be manufactured by 2030, from cost-efficient urban vehicles to sportier, higher-end ones. As well as efficiency, we bet on iconic designs such as the beloved R5 to bring the Renault touch to electrification, making electric cars popular.”

Previous: Fleet Assist gets garage network ‘hydrogen-ready’ for early adopter fleets
Next: Dramatic increase in interest for sale and leaseback as fleets ready for EVs