By Craig Thomas / 3 years ago / Road Tests / No Comments 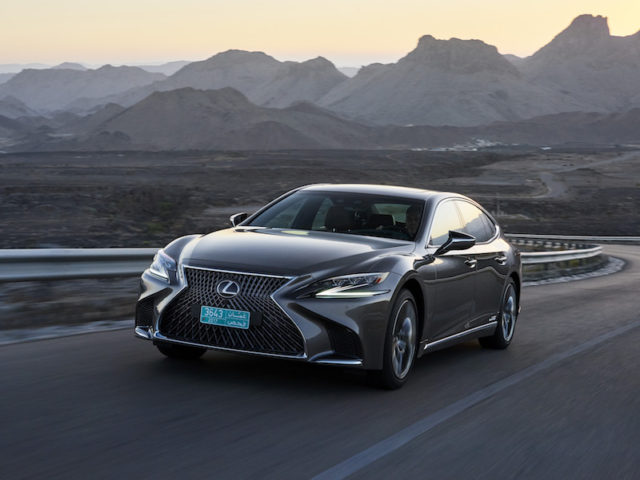 The large executive saloon market might not be a massive volume seller, but the cars that populate it are brand flagships that help define manufacturers and their product line-ups. The esteem in which Audi A8, BMW 7 Series and Mercedes-Benz S-Class are held are all you need to know about the importance of this class of car.

The new Lexus LS 500h is therefore an important car for Toyota’s premium sub-brand, both as a benchmark and as a showcase for getting a preview of the many features that will trickle down to future Lexus (and Toyota) models – the car is on an all-new platform, called Global Architecture-Luxury (GA-L).

A large part of the Japanese manufacturer’s product appeal is the hybrid powertrains that will be increasingly important to fleets in the coming year.

In the case of the LS, the only engine available to UK buyers is the 500h hybrid that combines a 3.5-litre V6 petrol engine and an electric motor, producing a total of 354bhp that results in a 0-62mph that takes just 5.4 seconds (or 5.5 seconds when the LS is fitted with all-wheel-drive).

Despite being a hybrid, official fuel economy is a not-particularly-impressive 43.5mpg (or 39.8mpg from cars fitted with all-wheel drive). Admittedly, that isn’t bad for a large executive saloon weighing in at almost 2.5 tonnes, as the LS 500h does, but when you consider that there are quite a few variants of the A8, 7 Series and S-Class – particularly those powered by diesel engines or plug-in hybrids – that will not only match but beat this figure, fleet buyers will think twice. The same goes for the 147g/km (161g/km with AWD) CO2 emissions.

However, when looking at TCO, the LS 500h does have a couple of cards up its sleeve, particularly the Lexus brand’s reputation for reliability, which will certainly reduce maintenance costs and the potential downtime when the car is off the road.

At this end of the market, image is vitally important – and this is another area where the LS 500h makes a strong case for itself. The biggest design trend in the executive market in recent years is the way in which carmakers are using sporty, coupé-like styling to staunch the flow of drivers out from saloons and into SUVs and crossovers: think BMW 4 Series and 6 Series Gran Coupés, Mercedes-Benz CLS or Audi A5 and A7 Sportbacks.

The LS is very much in this vein, with a swooping roof that slopes down at the rear, large air scoops in the nose of the car, 20-inch wheels and unfussily sculpted body panels. It’s certainly a striking-looking car – although the spindle grille will very much be a matter of taste.

The interior is another strong point of the LS 500h, with its luxurious leather and wood surfaces, extremely high-quality fit and finish, and superb levels of comfort. It’s spacious, too, especially if you’re the rear-seat passenger who bags the executive seat, with fold-out ottoman, which enables you to recline and relax. The overall effect is only undermined by the infotainment system that, even though there’s a very usefully-sized 12.3-inch screen, has Lexus’s clunky and slow-reacting touchpad controller.

Also something of a drawback is the driving character of the LS, which is adversely affected by the powertrain/gearbox combination (the latter is a CVT-based system with many – but not all – of the drawbacks you’d associate with it), the weight of the car (thanks to the batteries for the hybrid system) hampers any sense of nimbleness or agility, and there’s a general lack of engagement. It’s a decent enough drive, but it isn’t as involving as the 7 Series, for example: this might not be a deal-breaker for many buyers, but it’s a consideration.

There’s certainly much to commend in the LS 500h, as it provides a comfortable and luxurious travelling experience, and is a desirable blend of reliability, safety and economy. But this is a tough segment of the market and its European rivals have an edge, particularly those with plug-in hybrid variants.