A team of researchers have developed a new battery technology capable of providing a 45% increase in capacity and up to five times faster charging speeds than lithium-ion, which Samsung suggest would be beneficial for electric vehicles. 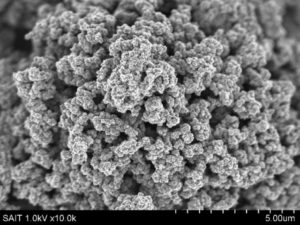 The company says that, in theory, a battery using this new “graphene ball” material would require only 12 minutes to fully charge. However, the company did not state what capacity that time would provide but did add that it can be produced at an affordable price.

The battery is also said to be stable at a constant 60ºC, with stability being a key attribute for electric vehicles, Samsung added.

The researchers said they were looking for an approach to apply graphene and found a mechanism to synthesise graphene into a 3D form resembling “popcorn”, using silica (SiO2) and thus calling it a graphene ball.

The research was conducted by Samsung Advanced Institute of Technology (SAIT) in collaboration with Samsung SDI and a team from Seoul National University’s School of Chemical and Biological Engineering.

Dr. Son In-hyuk, who led the project on behalf of SAIT, said, “Our research enables mass synthesis of multifunctional composite material graphene at an affordable price. At the same time, we were able to considerably enhance the capabilities of lithium-ion batteries in an environment where the markets for mobile devices and electric vehicles is growing rapidly. Our commitment is to continuously explore and develop secondary battery technology in light of these trends.”