The Scottish Government is pressing ahead with expansion of its charging point infrastructure through some 800 extra charge points to support EV take-up. 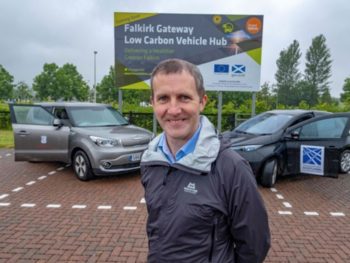 Announced some two years after Scotland revealed plans in the Programme for Government to ban sales of new petrol and diesel cars and vans by 2032, the move sees funding of £20.6m committed to support the uptake of electric vehicles through the Switched on Towns and Cities Challenge Fund and the Local Authority Installation Programme.

This includes £12.1m awarded to five local authorities though the first round of the Switched on Towns and Cities Challenge Fund which will bring a further 500 charge points to the public.

In addition, the latest phase of the Local Authority Installation Programme will see 31 local authorities receive a total of £8.5m in funding throughout the financial year for electric vehicle infrastructure to deliver approximately 300 charge points.

The funds were announced by the Cabinet Secretary for Transport, Infrastructure and Connectivity Michael Matheson as he broke ground on the construction of a new electric vehicle charging hub outside Falkirk Stadium. The hub is being developed by Falkirk Council after being awarded over half a million pounds of support through the Transport Scotland Low Carbon Travel and Transport Challenge Fund – with money provided by the Scottish Government and the European Regional Development Fund.

Michael Matheson said: “Electric vehicles can bring profound benefits and by announcing over £20m to support new electric vehicle infrastructure, further reinforcing what is already one of the most comprehensive charging networks in Europe, demonstrates the strength of our continued commitment to this agenda.”