Seat will launch its first fully electric and plug-in hybrid vehicles in 2020, the latter a version of the all-new Leon, which will launch next year. 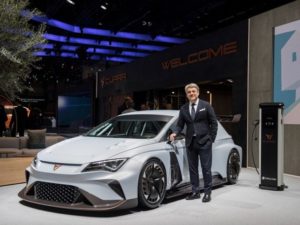 The carmaker outlined its plans at its annual Media Conference in Madrid, confirming it will launch one new model every six months until the end of the decade, and begin its electrification initiative in 2020.

Among them will be a new version of the Leon, which will follow the Ibiza in that it won’t be available with a three-door bodystyle – five-door hatchback and ST estates will be available from launch.

The plug-in hybrid Leon will arrive a year later, offering a range of more than 31 miles to a full charge, and likely to be based on the new 1.5-litre TSI Evo petrol engine, though the latter is unconfirmed. It has been hinted that this could be part of the new Cupra high-performance sub-brand.

Also due in 2020 is a “competitively priced” fully electric car, based on the same modular electric platform which will be used by Volkswagen’s I.D. range. This will target a range of up to 310 miles and offer Level 2 “hands-off” autonomous driving capability.