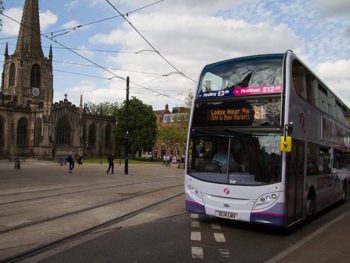 The council was one of 23 named in Defra’s 2017 air quality plan as required to draw up plans for delivering compliance in their local area in the shortest possible time. NHS studies suggest up to 500 people die per year in Sheffield for conditions connected to air pollution.

Sheffield’s plans, which would not affect cars, follow a feasibility study that suggested a clean air zone similar to ones proposed in Leeds, Glasgow and Southampton, would be needed to bring the city’s air quality in line with legal levels by January 2021. The council added that its research had found that buses, coaches, taxis, HGVs and LGVs cause disproportionately more pollution and often criss-cross the city with multiple trips.

Vehicles would need to be Euro 6-compliant (diesel) or Euro 4 (petrol) to avoid charges, which could be levied at £10 a day for vans/LGVs, taxis and private hire vehicles and £50 a day for buses, coaches and HGVs.

The proposals will be subject to a government decision in early 2019 and followed by public consultation in the new year – including residents, businesses, taxi drivers and bus companies – before the new measures are introduced the following year.

In a report released today, to be considered by the cabinet on 21 November, Sheffield City Council said it would be seeking around £40m from government to support its activities in this area, including the installation of signs and cameras on the ring-road that will enable charges to be put in place.

“Our intention is to remove the most polluting vehicles from our road network by encouraging drivers to upgrade to cleaner vehicles rather than pay the charge. We need funding from government to provide support, advice and finance to encourage people to upgrade their vehicles if required.”

He added that this would mean significant fleet change to buses, taxis, HGV/LGVs as well as transport changes such as increased bus and tram priority and the rollout of electric charging points. The introduction of electric vehicles, buses and taxis will also be key.

“My vision is for air that is clean and safe for every single person in Sheffield. Standing by whilst people become poorly and die is simply not an option,” said Councillor Scott.

The plans build on the council’s 2017 Clean Air Strategy, which introduced measures including anti-idling and upgrading the taxi fleet to electric taxis.